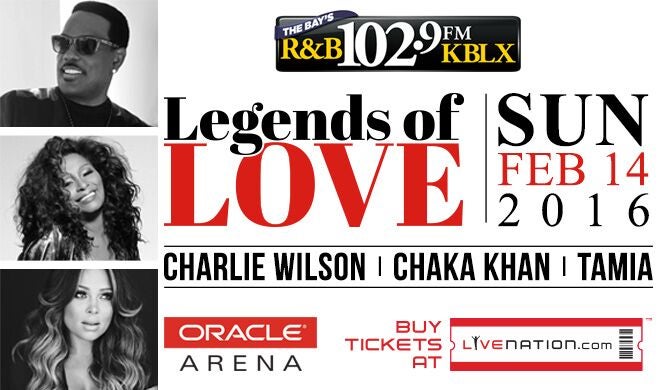 The 2016 Legends of Love concert is coming to Oracle Arena on February 14th - the perfect show to attend with your valentine!

Performing at this year's Legends of Love concert are none other than Charlie Wilson, Chaka Khan, and Tamia.

Charlie Wilson, co-founder of iconic funk trio the Gap Band, is a Nine-time Grammy nominee. In addition to his nine Grammy nominations, Wilson was named Billboard’s No. 1 Adult Artist in 2009 and received the Trumpet Foundation’s Lifetime Achievement Award in 2013. He wrapped 2014 with two Grammy nominations—Best Rap/Sung Collaboration and Best Rap Song—for his singing and songwriting contributions to Kanye West’s “Bound 2.”

Chaka Khan is a ten-time GRAMMY® Award winner (with 22 GRAMMY® nominations) who has the rare ability to sing in eight music genres, including R&B, jazz, pop, rock, gospel, country, classical and dance music. She has released 22 albums and racked up ten #1 Billboard magazine charted songs, and eleven RIAA certified gold and platinum albums.

Tamia is a six-time Grammy nominee, whose big break came when she collaborated on Quincy Jones’ Q’s Jook Joint album in 1995, followed by the release of her self-titled debut album.  During that time frame, this previously unknown singing sensation received three Grammy nominations: Best Female R&B Vocal Performance for "You've Put A Move On My Heart;" Best R&B Performance By A Duo Or Group with Vocal for "Slow Jams," which she performed with Babyface and Best Pop Collaboration with Vocals for her work with Brandy, Gladys Knight and Chaka Khan on the single "Missing You" from the Set It Off soundtrack.