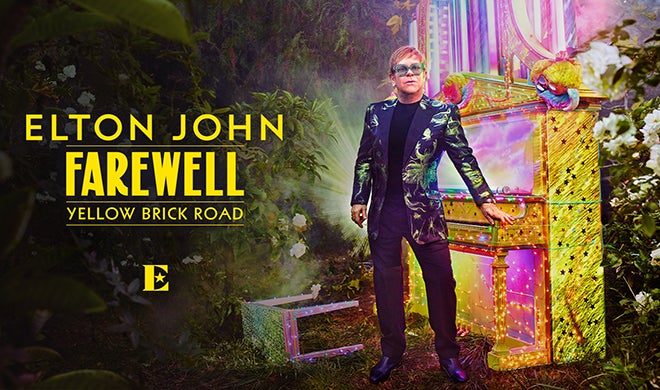 After more than half a century on the road and an unparalleled career that has redefined the cultural landscape and seen Elton John claim his place as a true global icon, the superstar has announced details of his final tour called ‘Farewell Yellow Brick Road’.

Kicking off in the U.S. on September 8, 2018, the ‘Farewell Yellow Brick Road’ tour will consist of more than 300 shows across five continents, hitting North America, Europe, Asia, South America and Australasia before reaching its conclusion in 2021. These dates mark the superstar’s last-ever tour, the end of half a century on the road for one of pop culture’s most enduring performers. Elton’s new stage production will take his fans on a musical and highly visual journey spanning a 50-year career of hits like no one has ever seen before.

“Performing live fuels me and I’m ecstatic and humbled to continue to play to audiences across the globe,” said Elton. “I plan to bring the passion and creativity that has entertained my fans for decades to my final tour. After the tour finishes, I’m very much looking forward to closing off that chapter of my life by saying farewell to life on the road. I need to dedicate more time to raising my children.”

Tickets go on sale to the general public beginning February 2 at 10 a.m. VIP packages can be purchased at EltonJohn.com.

The #bigstepperstour hits #oakland 8.31 & 9.1 Who’s coming? 📸: Greg Noire
Surprise 😉 @breakaway is coming to Oakland for the first time ever and the lineup is 🤯 Come party with @gryffin , @louisthechild , @bigwildmusic , @saidthesky , @tychomusic and many more as they light up the @oaklandarea Grounds on Friday, October 14 and Saturday, October 15 🍾 Sign up for notifications and secure your tickets tomorrow at 10am - You won’t want to miss out 🙌 🔔: breakawayfestival.com/venues/bay-area
One month until @diljitdosanjh is here in Oakland💥 Tickets are still available for purchase. #liveinoakland #diljitdosanjh
To The Moon 🚀, Don’t miss @kidcudi's 2022 World Tour here at Oakland Arena on Aug. 21st, with @dontoliver @denzelcurryph and @strick . Tickets on sale Friday 6/24 at 10am!
JUST ANNOUNCED 🚨 @jokoy is bringing his Funny is Funny World Tour to Oakland on Friday, Dec. 2nd! Onsale 6/17 at 10:00am
CARATs, Tickets on sale NOW 💙 Don't miss SEVENTEEN WORLD TOUR [BE THE SUN] - Oakland on Aug. 14 at Oakland Arena! #세븐틴 #SEVENTEEN #SVT_WORLDTOUR_BETHESUN #BETHESUN
Set your alarms! Verified Fan presales for SEVENTEEN WORLD TOUR [BE THE SUN] – Oakland start tomorrow at 3PM! Who is coming to Oakland Arena? #세븐틴 #SEVENTEEN #SVT_WORLDTOUR_BETHESUN
TICKETS ON SALE NOW 🌊 @kehlani on Sept. 30th! #bluewaterroadtriptour
JUST ANNOUNCED @kendricklamar’s #TheBigSteppersTour with @keem & @tanna.duh on August 31 and September 1 at Oakland Arena. Tickets on sale next Friday 12pm. #kendricklamar
Who’s ridin’? @kendricklamar returns to Oakland on #thebigstepperstour with @keem & @tanna.duh August 31 and September 1st.💥 Tickets on sale next Friday 12:00pm. 🎥: @tonyrain415 #kendricklamar
Hip-Hop Icons @wutangclan & @nas are bringing their #newyorkstateofmindtour here on Oct. 1st!
@marcanthony brought the moves to Oakland last night 😎 #liveinoakland
Last night was magical ✨ Until next time @twicetagram