The man, the legend – It’s R. Kelly live in concert at 8pm on October 2nd at Oracle Arena.  After countless radio singles spanning two decades, this award winning songwriter, producer and phenomenal performer is on tour supporting his new album ‘The Buffet’.

Tickets go on sale Friday, August 7 at 12:00PM. Tickets will be available through Ticketmaster.com, all Ticketmaster outlets and charge by phone 800-745-3000.

The anticipation has heightened furthermore as R.Kelly is preparing to follow up his Black Panties album (2013), with “The Buffet: All You Can Hear”, which will be available on September 25th. The three-time Grammy winning king of R&B, makes music of epic proportions. After 18 years of stardom, the multi-instrumentalist, producer and vocalist continues to forge an artistic path that caters to fantasy and captures the hearts of adoring fans, which is in essence, how an artist sells over 50 million records worldwide, and wears the crown of a king.

In an era of declining songwriting skills and auto tune crooning R. Kelly embodies the best traditions of American music as a vocalist, songwriter and producer. He uses classic materials to create music as contemporary as Siri’s iPhone voice. Despite selling millions of recordings and writing classic songs for himself and many others, this Chicago based singer-songwriter continues to push his art forward.

The charts are telling of the Chicago native’s storied success— six #1 albums, 11 #1 singles, and 12 consecutive platinum albums. Yet, beyond the numbers is his vital contribution to the soul music continuum. R. Kelly’s musical tome is ripe with scintillating delivery and stirring rhythms that outlast thinner melodies by fleeting one-hit sensations. In one moment, he is the virtuoso that delves into slow, deep delicious seduction, and the next finds him the sexy showman at the center of the party, in full body-rocking up-tempo flavor. From the tantalizing eight-times platinum R., to the Grammy-award winning anthem “I Believe I Can Fly,” to his recent hit single “I’m a Flirt” with Bow Wow that garnered a 2008 ASCAP Rhythm and Soul Music Award, R. Kelly is the essence of true R&B. 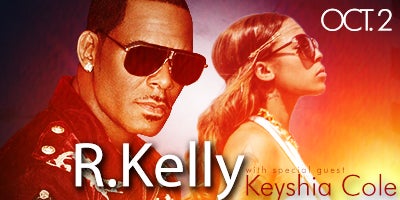