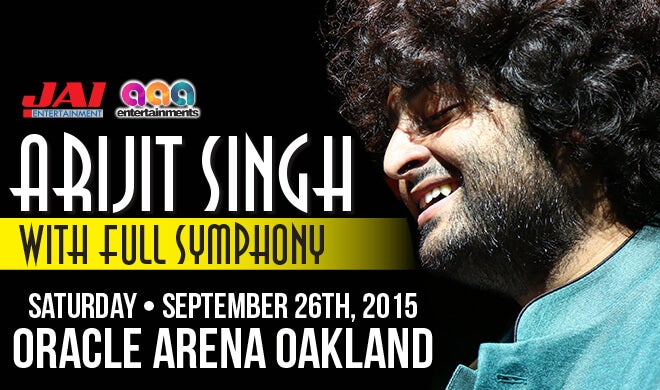 Arijit Singh's voice has taken the country over by storm and he is one of India's leading & most successful singers. He has produced one hit song after another and his music is favored by the youth and people of all ages....his music and his songs are versatile and soulful, making him a household name not only in India but his fans all over the world.

Tickets are available at all Ticketmaster locations, online at Ticketmaster.com and charge by phone at 800.745.3000.

JUST ANNOUNCED: Shawn Mendes is bringing Wonder: The World Tour to OAKLAND ARENA on SATURDAY, SEPTEMBER 17, 2022. Tickets on sale Thursday, October 7. Full dates and ticket info at WonderTheTour.com.
Presale happening now for @GrupoFirme on Saturday, Nov 6! Use code: FIRMEMANIA Tickets on sale tomorrow 9/23 at 10am at Ticketmaster
Fugees Reunion Tour 2021 25 year celebration of The Score November 7 at Oakland Arena Tickets on sale this Friday at 10am at Ticketmaster.com
MISSED THIS 🖤
JUST ANNOUNCED @jbalvin is bringing the José Tour to Oakland on May 1, 2022 ⚡️ Tickets on sale Sept 17 at 12PM
your presence is requested in OAKLAND on FEBRUARY 19 for @spaceykacey 𝖘𝖙𝖆𝖗-𝖈𝖗𝖔𝖘𝖘𝖊𝖉: 𝖚𝖓𝖛𝖊𝖎𝖑𝖊𝖉 tickets are on sale now
Get presale tickets for Kacey Musgraves on Feb. 19th until 10pm tonight. Use code TWOLOVERS 🎟: bit.ly/KaceyOakland
JUST ANNOUNCED! @systemofadown on Oct. 18 Tickets on sale Friday at 10am
See you all in #2021 ✨
Can’t stop listening to @ShawnMendes’ new album #WONDER. Here’s one of our fav moments from the last time Shawn took the stage in Oakland. Drop a 🖤 below if you were here!
Reminiscing 😌
Tonight we are going RED in solidarity with the live entertainment industry as part of the #RedAlertRESTART initiative. Join our team in posting your favorite live event memory using #WeMakeEvents #RedAlertRESTART
Who remembers plaza parties? #DubNation Arena Archives - June 2019
Tonight we #LightItBlue to thank all the medical professionals around the world. We thank you greatly for your service during this time. Today on World Health Day, and everyday, we honor you with an #ASMGlobalStandingOvation
Where my Icy Girls at? 💎 Arena Archives - #RollingLoud 2019
Reminiscing about opening up the pit 💭 Arena Archives - #RollingLoud 2019