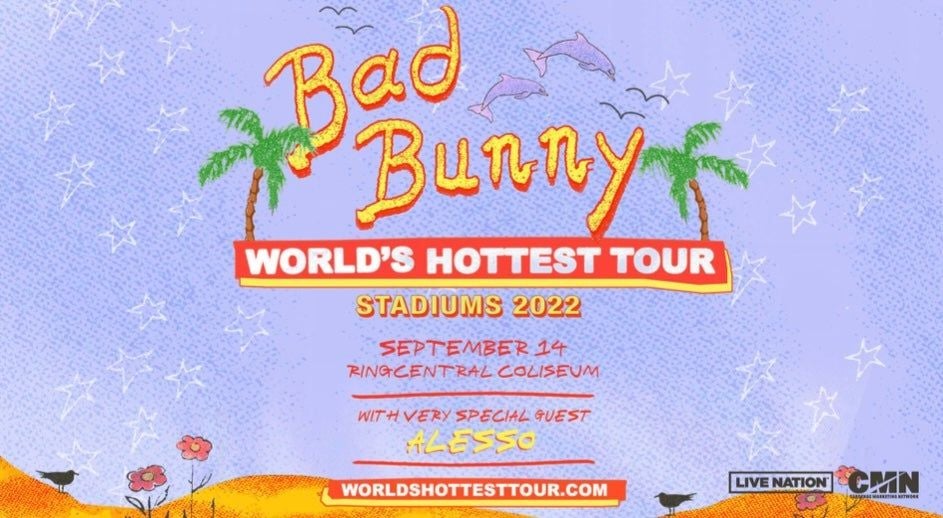 Proclaimed the most listened-to artist in the world for a second consecutive year by Spotify, Bad Bunny has distinguished himself for his revolutionary moves that constantly impact the music industry. Today, the multi-award-winning artist adds a new milestone to his career, announcing his first stadium tour "Bad Bunny: World's Hottest Tour'' across the United States and Latin America. Promoted by Live Nation and CMN in the U.S., the tour kicks off on August 5th at Camping World Stadium in Orlando, FL, making stops in Miami, Chicago, New York and many more before wrapping at SoFi Stadium in Los Angeles on September 30th, then heading out to Latin America in October. Tickets for this stadium tour will go on pre-sale beginning Wednesday, January 26 at 12pm local time. Subsequently, they will go on sale to the general public beginning Friday, January 28 at 12pm local time on worldshottesttour.com.

Over the past year, Bad Bunny has released top hits that have earned him the title of #1 Latin Artist in the US by Billboard for a third consecutive year and was also named one of the top 10 most popular global superstars. As if that were not enough, he is also the highest-ranking Latin act on Billboard's general all genre chart "Top Artists," ranking at #10, and is the artist with the most hits to reach the Top 10 of the "Hot Latin Songs" chart since the charts inception.

Bad Bunny is mobile tickets only. Please visit Ticketmaster.com to purchase. The Arena Box Office will not be selling tickets.

Outside food and beverages are not allowed into RingCentral Coliseum.

JUST ANNOUNCED @kendricklamar’s #TheBigSteppersTour with @keem & @tanna.duh on August 31 and September 1 at Oakland Arena. Tickets on sale next Friday 12pm. #kendricklamar
Who’s ridin’? @kendricklamar returns to Oakland on #thebigstepperstour with @keem & @tanna.duh August 31 and September 1st.💥 Tickets on sale next Friday 12:00pm. 🎥: @tonyrain415 #kendricklamar
JUST ANNOUNCED 🤘 @scorpions on Oct. 18th. Tickets on sale 5/13 at 10:00am!
JUST ANNOUNCED @secondskyfest is returning to the Oakland Arena Grounds on Oct. 29th & 30th. Tickets will be available Friday May 13th- signup for early access at secondskyfest.com
Hip-Hop Icons @wutangclan & @nas are bringing their #newyorkstateofmindtour here on Oct. 1st!
SHOW POSTPONED: The J Balvin show scheduled for May 1st has been postponed and a new date will be announced soon. Please visit our website for more details.
JUST ANNOUNCED 💥 @daddyyankee on Aug 2nd! Tickets on sale 4/15 at 10:00am
JUST ANNOUNCED 🚨 @anuel on Sept. 10th On sale April 8th at 10:00am
Your summer bop is HERE!! ☀️☀️ We can't wait to sing along with @ShawnMendes when he brings Wonder: The World Tour to us on Sept. 17th. Limited tickets available, starting at $39.50. Get them now at: bit.ly/WonderOakland
We got lost…we called… @feliciathegoat answered our call 📞🐐🍩 #callmeifyougetlost #liveinoakland
@marcanthony brought the moves to Oakland last night 😎 #liveinoakland
We've teamed up with @oaklandcoffee to bring you the “From Oakland With Love” giveaway! Enter through 3/28 for a chance to win FOUR VIP TICKETS & a specially curated bundle of Oakland Coffee’s shockingly smooth organic coffee and awesome merch. 🔗 in bio to enter!
Last night was magical ✨ Until next time @twicetagram
JUST ANNOUNCED 🔥 @mount_westmore featuring @snoopdogg @icecube @e40 @tooshort + special guest @warreng on May 27th! Tickets on sale 2/11 at 10:00am
“El Stomper” getting hyped for @badbunnypr #WORLDSHOTTESTTOUR on Sept. 14th #AtTheColiseum 🔥🌴 Tickets on sale at noon