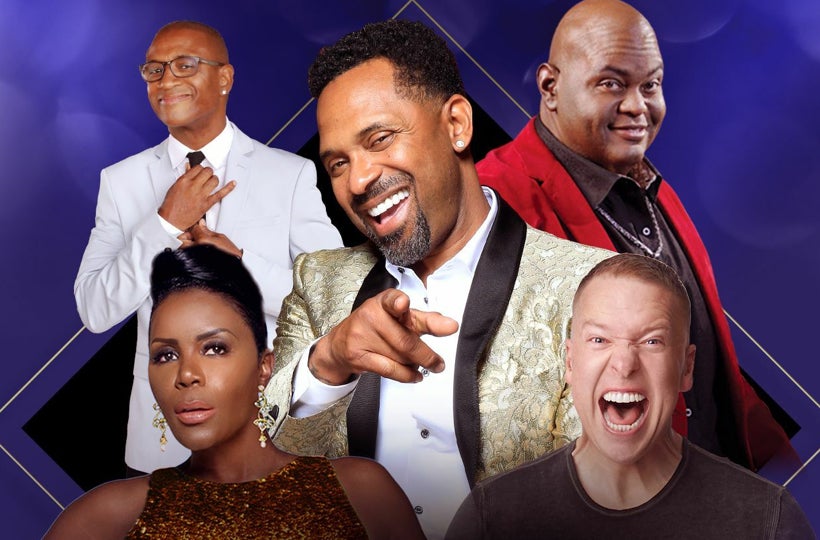 MIKE EPPS:
Highly praised for his performance in the Netflix comedy “Dolemite Is My Name” starring opposite Eddie Murphy, Epps is generating an extraordinary amount of buzz among his peers for being not only one of the funniest comic actors in town, but also for his burgeoning dramatic talent.

In her more than 20-year career, award-winning comedienne of “Chandelier Status,” Sommore, has become a trailblazer for women in the comedy business as one of the most successful comedians in the U.S. and abroad.

Gary Owen is one of America’s most beloved comedians, having been proclaimed by Ebony magazine as Black America’s “Favorite White Comedian.” Audiences can see Owen in his most recent comedy special, “I Got My Associates” currently on Showtime.

Perhaps best known for starring in his own hit television sitcom "Hangin' With Mr. Cooper," which ran for five seasons on ABC, and for hosting "Showtime At The Apollo," comedian, actor, host Mark Curry is packing the laughs as one of the top national touring comedy acts.

TONY SCO:
With a rich blend of experience in television and radio, his professionalism and unique talent has made him a favorite on comedy stages, radio airwaves and television screens for years.

The #bigstepperstour hits #oakland 8.31 & 9.1 Who’s coming? 📸: Greg Noire
Surprise 😉 @breakaway is coming to Oakland for the first time ever and the lineup is 🤯 Come party with @gryffin , @louisthechild , @bigwildmusic , @saidthesky , @tychomusic and many more as they light up the @oaklandarea Grounds on Friday, October 14 and Saturday, October 15 🍾 Sign up for notifications and secure your tickets tomorrow at 10am - You won’t want to miss out 🙌 🔔: breakawayfestival.com/venues/bay-area
One month until @diljitdosanjh is here in Oakland💥 Tickets are still available for purchase. #liveinoakland #diljitdosanjh
To The Moon 🚀, Don’t miss @kidcudi's 2022 World Tour here at Oakland Arena on Aug. 21st, with @dontoliver @denzelcurryph and @strick . Tickets on sale Friday 6/24 at 10am!
JUST ANNOUNCED 🚨 @jokoy is bringing his Funny is Funny World Tour to Oakland on Friday, Dec. 2nd! Onsale 6/17 at 10:00am
CARATs, Tickets on sale NOW 💙 Don't miss SEVENTEEN WORLD TOUR [BE THE SUN] - Oakland on Aug. 14 at Oakland Arena! #세븐틴 #SEVENTEEN #SVT_WORLDTOUR_BETHESUN #BETHESUN
Set your alarms! Verified Fan presales for SEVENTEEN WORLD TOUR [BE THE SUN] – Oakland start tomorrow at 3PM! Who is coming to Oakland Arena? #세븐틴 #SEVENTEEN #SVT_WORLDTOUR_BETHESUN
TICKETS ON SALE NOW 🌊 @kehlani on Sept. 30th! #bluewaterroadtriptour
JUST ANNOUNCED @kendricklamar’s #TheBigSteppersTour with @keem & @tanna.duh on August 31 and September 1 at Oakland Arena. Tickets on sale next Friday 12pm. #kendricklamar
Who’s ridin’? @kendricklamar returns to Oakland on #thebigstepperstour with @keem & @tanna.duh August 31 and September 1st.💥 Tickets on sale next Friday 12:00pm. 🎥: @tonyrain415 #kendricklamar
Hip-Hop Icons @wutangclan & @nas are bringing their #newyorkstateofmindtour here on Oct. 1st!
@marcanthony brought the moves to Oakland last night 😎 #liveinoakland
Last night was magical ✨ Until next time @twicetagram
1862581393990918