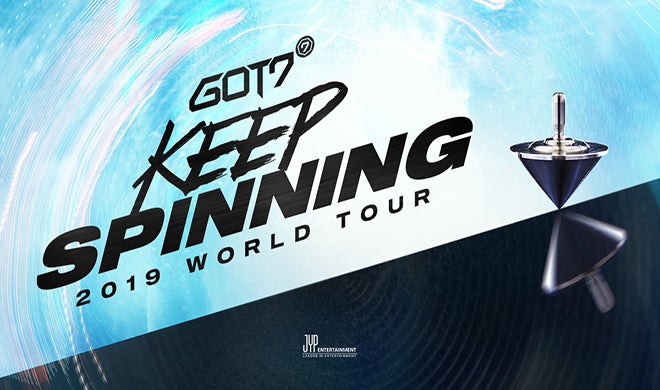 GOT7 is bringing their 2019 'Keep Spinning' World Tour to Oracle Arena on July 10th! Get your tickets on May 17th starting at 4 pm PDT.

Global sensation GOT7 is continuing to break records.  In 2018 the K-pop boy band made history as the first K-pop group to perform at Brooklyn's Barclays Center, to legions of screaming fans.  With over 100 million views on many of their music videos, GOT7 is a global group with members from Korea, China, Thailand and the United States. Comprised JB, Mark, Jackson, Jinyoung, Youngjae, BamBam, and Yugyeom, they all can communicate in multiple languages, including three members that are fluent in English.   Everyone brings something different to group from singing, dancing, rapping and martial arts, which they showcase in their live performances, to producing and songwriting their biggest hits.

In 2019 GOT7 was nominated for a Billboard Music Award and were the only Asian artist on Billboard's List of Top 10 tours in 2018, which included a sold out show at The Forum in Los Angeles, in addition to packed arenas across Seoul, Bangkok, Moscow, Paris, LA, New York, Mexico City, Buenos Aires.  With over 100 million views on many of their music videos, reaching number 1 on the US iTunes charts, and across 26 other regions, they are only just beginning.

2019 will see the release of their next album, Spinning Top, ahead of a their KEEP SPINNING World Tour which will include arena shows across North America.  The album delivers a universal theme of both confidence and insecurities within oneself, a theme that that will be displayed throughout the tour.

Their 2014 debut EP, Got It?, reached number 1 on Billboard's World Album, followed shortly by their first fully length album Identify, which topped the charts across Asia. In 2015 with the release of two Eps, Just Right and Mad, including the singles "Just Right," (266 million views on YouTube) and "If You Do"(150 million views on YouTube). In 2016 they released a Japanese studio album, Moriagatteyo, followed by their fifth EP Flight Log: Departure and their second full-length studio album Flight Log: Turbulence, both topping the charts across Asia. In 2017 the final album in the Flight Log series, Arrival, was their highest selling album to date and featuring the single "Never Ever," which has racked up 145 million views on YouTube.  That same year they released their 7th EP 7 for 7, followed by 2018's Eyes On You.

Happy V-Day from us & Ginuwine 🌹
What’s your favorite @celinedion song? Come sing along with us on 4/9 🎤 #CourageWorldTour
#TBT to 2013 🙌🏼 Pearl Jam tickets on sale tomorrow at 10AM. Don’t miss out! 📸: Karen Loria
It's gonna be a good life 💥 #BebeRexha 📸 @priscillapple
#HappinessBegins with you and your friends! Enjoy a VIP experience at the #JonasBrothers on 12/12 including: One luxury theatre box with (4) tickets and (1) parking pass. How to win: 🎉 Follow @oaklandarena 🎉 Tag 3 friends in the comments Ends 12/9 at 12PM See link in bio for rules #sweepstakes 📹 @jonasbrothers
Happy birthday @champagnepapi #tbt to 3 sold out nights🦉
3 years ago #SaintPabloTour
🔜 10/15
Felt cute, might delete later 🙈
The time has come! Tickets are on sale now for @celinedion April 9th, 2020 at Oakland Arena. bit.ly/CelineOakland
Thank you for two sold out days in the Bay
GO OFF
Lit 🔥 📸 @jessicapadover
KIRK 📸 @henryhwu
Welcome home, G 📸 @gradybrannan