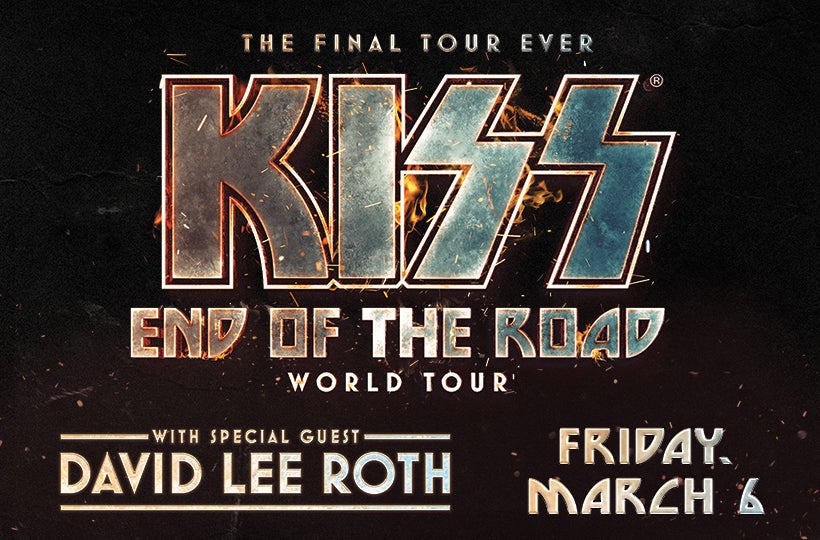 End of The Road World Tour

After selling more than half a million tickets at their initial on sale, KISS announced the second leg of their final tour ever set for 2019, appropriately named END OF THE ROAD! During their tour KISS will make a stop in Oakland on March 6, 2020. KISS will be offering VIP experiences and a special KISS Army fan presale.

KISS Meet & Greet Experiences will be available Tuesday, November 27 at 10am through kissonline.com.  KISS Army fan club presales will begin Wednesday, November 28 at 9am. Visit www.kissonline.com for more information. Tickets to the general public go on sale Monday, December 3 at 10am at LiveNation.com.

Known for their trademark larger-than-life blistering performances, KISS has proven for decades why they are hands down the most iconic live show in rock n roll. The Rock & Roll Hall of Famers who have sold more than 100 million albums worldwide have said this tour is devoted to the millions of KISS Army fans.

"All that we have built and all that we have conquered over the past four decades could never have happened without the millions of people worldwide who've filled clubs, arenas and stadiums over those years. This will be the ultimate celebration for those who've seen us and a last chance for those who haven't. KISS Army, we're saying goodbye on our final tour with our biggest show yet and we'll go out the same way we came in... Unapologetic and Unstoppable," said KISS.

Today we partnered with @safekidsalamedacounty and @aaa_national to help donate over 200 high- back booster seats to Alameda County families. Thank you to all the volunteers and sponsors who contributed to this event including Alameda County EMS, @gigcarshare, @mbjesseepaintinginc and @ots_ca 📸: @priscillapple
To The Moon 🚀, Don’t miss @kidcudi's 2022 World Tour here at Oakland Arena on Aug. 21st, with @dontoliver @denzelcurryph and @strick . Tickets on sale Friday 6/24 at 10am!
GOOD MORNING GORGEOUS! ✨ @therealmaryjblige is hitting the road with her Good Morning Gorgeous Tour. Presale begins this Thursday, June 16 at 10am. Use code BPC. General on sale begins this Friday at 10AM. For more information visit BPCTickets.com
JUST ANNOUNCED 🚨 @jokoy is bringing his Funny is Funny World Tour to Oakland on Friday, Dec. 2nd! Onsale 6/17 at 10:00am
CARATs, Tickets on sale NOW 💙 Don't miss SEVENTEEN WORLD TOUR [BE THE SUN] - Oakland on Aug. 14 at Oakland Arena! #세븐틴 #SEVENTEEN #SVT_WORLDTOUR_BETHESUN #BETHESUN
Set your alarms! Verified Fan presales for SEVENTEEN WORLD TOUR [BE THE SUN] – Oakland start tomorrow at 3PM! Who is coming to Oakland Arena? #세븐틴 #SEVENTEEN #SVT_WORLDTOUR_BETHESUN
Nelly, Ja Rule, Ashanti, Lil Jon, Fabolous and more return to the Bay performing all their hits under one roof Friday, August 5th at Oakland Arena Tickets on sale next Friday, June 3 10am at Ticketmaster.com. Don’t miss out!
TICKETS ON SALE NOW 🌊 @kehlani on Sept. 30th! #bluewaterroadtriptour
JUST ANNOUNCED 📢 SEVENTEEN WORLD TOUR [BE THE SUN] - Oakland is heading to Oakland Arena on Aug. 14th! Get exclusive access to the CARAT MEMBER - VERIFIED FAN PRESALE. 1. Register on https://campaigns.weverse.io/SEVENTEEN_BE_THE_SUN_NORTH_AMERICA 2. Then visit & register on https://www.ticketmaster.com/seventeen Sign up NOW through Thursday, May 26 at 7PM PT / 9PM CT / 10PM ET. #세븐틴 #SEVENTEEN #SVT_WORLDTOUR_BETHESUN #BETHESUN
JUST ANNOUNCED @kendricklamar’s #TheBigSteppersTour with @keem & @tanna.duh on August 31 and September 1 at Oakland Arena. Tickets on sale next Friday 12pm. #kendricklamar
Who’s ridin’? @kendricklamar returns to Oakland on #thebigstepperstour with @keem & @tanna.duh August 31 and September 1st.💥 Tickets on sale next Friday 12:00pm. 🎥: @tonyrain415 #kendricklamar
Hip-Hop Icons @wutangclan & @nas are bringing their #newyorkstateofmindtour here on Oct. 1st!
JUST ANNOUNCED 💥 @daddyyankee on Aug 2nd! Tickets on sale 4/15 at 10:00am
JUST ANNOUNCED 🚨 @anuel on Sept. 10th On sale April 8th at 10:00am
Your summer bop is HERE!! ☀️☀️ We can't wait to sing along with @ShawnMendes when he brings Wonder: The World Tour to us on Sept. 17th. Limited tickets available, starting at $39.50. Get them now at: bit.ly/WonderOakland
We got lost…we called… @feliciathegoat answered our call 📞🐐🍩 #callmeifyougetlost #liveinoakland
@marcanthony brought the moves to Oakland last night 😎 #liveinoakland
We've teamed up with @oaklandcoffee to bring you the “From Oakland With Love” giveaway! Enter through 3/28 for a chance to win FOUR VIP TICKETS & a specially curated bundle of Oakland Coffee’s shockingly smooth organic coffee and awesome merch. 🔗 in bio to enter!