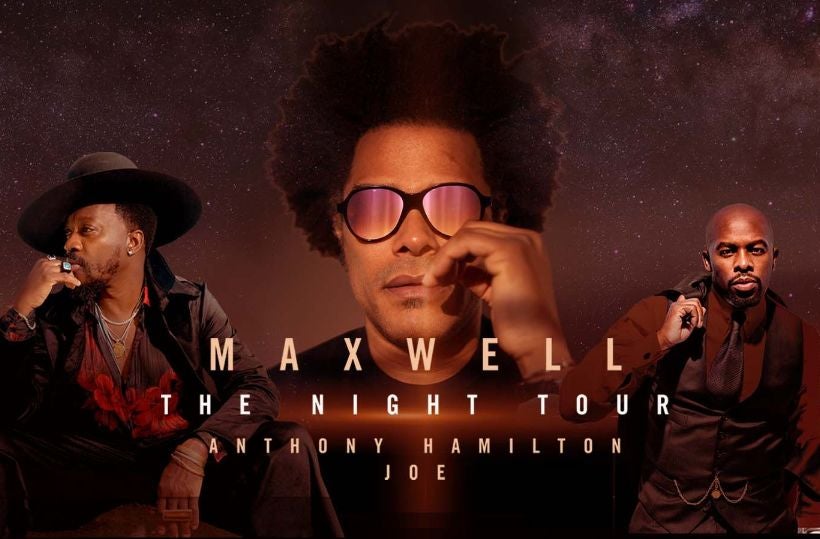 With Anthony Hamilton and Joe

Preparing to deliver one of the most-anticipated R&B events of next year, three-time GRAMMY® Award-winning multiplatinum artist Maxwell announces his new full-length album, blacksummers’NIGHT, out Spring 2022. It notably marks his first release under a newly minted deal with BMG and closes out the trilogy he began with the #1 GRAMMY® Award-winning epic, BLACKsummers’night, in 2009.

Maxwell says: “From announcing a new partnership with BMG for my label Musze to receiving the Legend Award at the upcoming 2021 Soul Train Awards, I couldn’t be more excited to share this new single with loved ones offering a glimpse into NIGHT…”

Additionally, Maxwell will support his upcoming album with the NIGHT 2022 Tour across North America in partnership with the Black Promoters Collective – the preeminent coalition of African American independent promoters. The 25-date run kicks off in Dallas, TX at Texas Trust CU Theater, visits legendary arenas such as Barclays Center in Brooklyn and The Forum in Los Angeles, and concludes at FTX Arena in Miami, FL on May 8. Anthony Hamilton and Joe have been confirmed as support.

Tickets go on-sale to the public on November 29.

Maxwell has artfully managed to transfix music lovers for more than two decades, releasing five studio albums, all in his own time and all duly anointed as classics. The soul singer redefined soul music in April of 1996 when he released his critically acclaimed debut on Columbia, 'Maxwell's Urban Hang Suite.' It earned Grammy nominations, double platinum status and RIAA gold for the single, "Ascension (Don't Ever Wonder)." The platinum albums 'Embrya' (1998) and 'Now' (2001) followed. After eight years, 2009's 'BLACKsummers'night' debuted at No. 1 on the Billboard 200 and won two Grammys, including Best R&B Album. To date, Maxwell has achieved 4 platinum album certifications from the RIAA. His last album ‘blackSUMMERS’night,’ the second installment of his musical trilogy, earned Maxwell his third-Grammy (Best R&B Song for “Lake By The Ocean”) an NAACP Image Award (Outstanding Male Artist), and a Soul Train Award (Best R&B/Soul Male Artist).

Contest Alert 🚨 Tag one (1) friend in the comments below 👇 for a chance to win two (2) tickets to see @shawnmendes here 9/17!
JUST ANNOUNCED! TWICE 4TH WORLD TOUR ‘Ⅲ’ IN NORTH AMERICA. Tickets will go on sale Friday, December 10th at 3pm. Stay tuned for more information!
JUST ANNOUNCED 🚨 MAXWELL: The Night Tour with Anthony Hamilton and Joe on April 16th! On sale Nov. 29th at 10:00AM
Favorite moment from last night? #theoffseasontour
Hits different in the Bay 😍 #TheOffSeasonTour
JUST ANNOUNCED Bill Burr heads to Oakland on Sat. May 14! Tickets on sale Friday at 10am
Wonder: The World Tour tickets are on sale now! Who’s ready to see @ShawnMendes at Oakland Arena on Sat. September 17?
Fugees Reunion Tour 2021 25 year celebration of The Score November 7 at Oakland Arena Tickets on sale this Friday at 10am at Ticketmaster.com
MISSED THIS 🖤
JUST ANNOUNCED @jbalvin is bringing the José Tour to Oakland on May 1, 2022 ⚡️ Tickets on sale Sept 17 at 12PM
Get presale tickets for Kacey Musgraves on Feb. 19th until 10pm tonight. Use code TWOLOVERS 🎟: bit.ly/KaceyOakland
See you all in #2021 ✨
Can’t stop listening to @ShawnMendes’ new album #WONDER. Here’s one of our fav moments from the last time Shawn took the stage in Oakland. Drop a 🖤 below if you were here!
Reminiscing 😌
Tonight we are going RED in solidarity with the live entertainment industry as part of the #RedAlertRESTART initiative. Join our team in posting your favorite live event memory using #WeMakeEvents #RedAlertRESTART