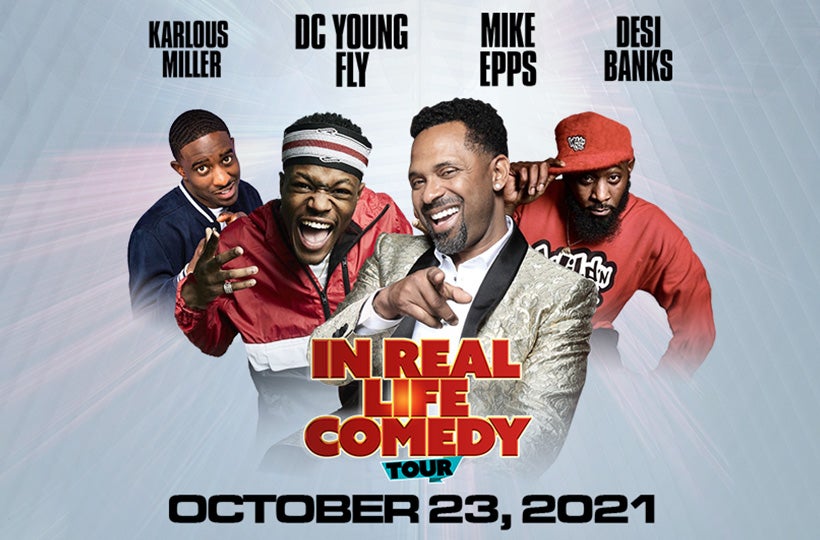 Actor and comedian, Mike Epps, is set to bring the laughs to Oakland once again with the IN REAL LIFE COMEDY TOUR. Performing at the Oakland Arena on October 23 at 8 p.m., Epps will be joined on stage with some of comedy’s most talented and sought-after entertainers, including DC Young Fly, Karlous Miller and Desi Banks. Tickets go on sale to the general public July 16 at 10 a.m. at Ticketmaster.com. The all-star lineup will be sure to bring down the house with non-stop laughter for an unforgettable night of comedy!

Epps is generating an extraordinary amount of buzz among his peers for being not only one of the funniest comic actors in town, but also for his burgeoning dramatic talent. Epps is currently starring in the Netflix comedy series “The Upshaws” with Wanda Sykes, and “The House Next Door,” sequel to the 2016 film “Meet The Blacks.” His recent film credits include the Amazon feature “Troup Zero” with Viola Davis, Allison Janney, and Jim Gaffigan, in addition to the Netflix comedy “Dolemite Is My Name” with Eddie Murphy. Last summer, Epps released his latest standup special “Mike Epps: Only One Mike” (Netflix), and dropped the single “We Goin’ Out” feat. Big Boi and Sleepy Brown. Up next, Epps will be starring in “Last Friday.”

The In Real Life Comedy Tour is presented by North American Entertainment Group Inc., one of the leading independent promoters of entertainment tours and live events in the United States.

JUST ANNOUNCED Bill Burr heads to Oakland on Sat. May 14! Tickets on sale Friday at 10am
Wonder: The World Tour tickets are on sale now! Who’s ready to see @ShawnMendes at Oakland Arena on Sat. September 17?
CONTEST ALERT! Tag a friend below for a chance to win two tickets to see #KaceyMusgraves on Feb. 19th + a vinyl of her new album 𝖘𝖙𝖆𝖗-𝖈𝖗𝖔𝖘𝖘𝖊𝖉. A winner will be chosen tomorrow at 10am.
Fugees Reunion Tour 2021 25 year celebration of The Score November 7 at Oakland Arena Tickets on sale this Friday at 10am at Ticketmaster.com
MISSED THIS 🖤
JUST ANNOUNCED @jbalvin is bringing the José Tour to Oakland on May 1, 2022 ⚡️ Tickets on sale Sept 17 at 12PM
Get presale tickets for Kacey Musgraves on Feb. 19th until 10pm tonight. Use code TWOLOVERS 🎟: bit.ly/KaceyOakland
See you all in #2021 ✨
Can’t stop listening to @ShawnMendes’ new album #WONDER. Here’s one of our fav moments from the last time Shawn took the stage in Oakland. Drop a 🖤 below if you were here!
Reminiscing 😌
Tonight we are going RED in solidarity with the live entertainment industry as part of the #RedAlertRESTART initiative. Join our team in posting your favorite live event memory using #WeMakeEvents #RedAlertRESTART
Who remembers plaza parties? #DubNation Arena Archives - June 2019
Tonight we #LightItBlue to thank all the medical professionals around the world. We thank you greatly for your service during this time. Today on World Health Day, and everyday, we honor you with an #ASMGlobalStandingOvation
Where my Icy Girls at? 💎 Arena Archives - #RollingLoud 2019
Reminiscing about opening up the pit 💭 Arena Archives - #RollingLoud 2019
👅