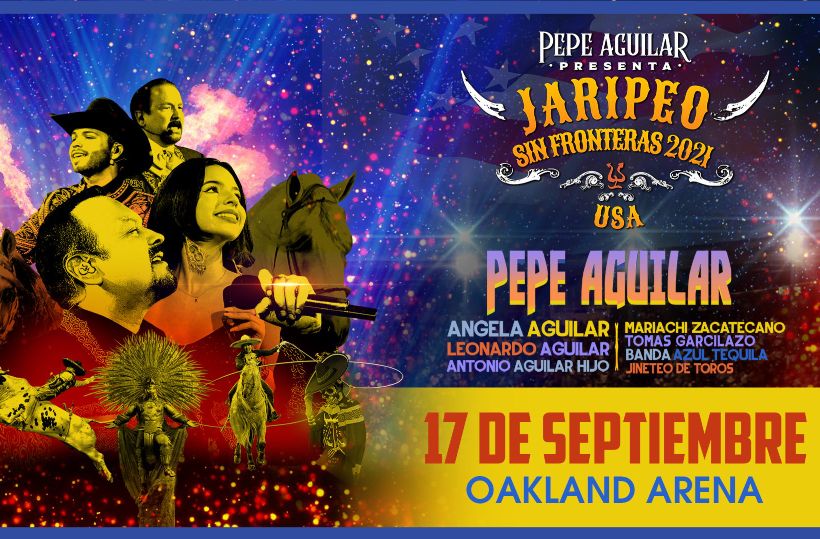 Following an impressive run through the United States and Mexico in 2018 and 2019 with his Jaripeo sin Fronteras tour, iconic Grammy award-winning singer, songwriter and producer Pepe Aguilar announces his return to the stage with 16 new tour dates this fall, produced by Live Nation. Tickets will go on sale beginning Friday, May 7th at 12pm.

Conceptualized by Pepe Aguilar himself, Jaripeo sin Fronteras tour experienced tremendous success for two consecutive years across the U.S. and Mexico, filling every single venue it made stops at. As live music events finally resume this year, Jaripeo sin Fronteras will continue its unstoppable momentum and become one of the first tours to return to the United States in 2021, allowing fans to once again enjoy the unique magic and traditions of the legendary Aguilar family.

Backed by his band El Mariachi “El Zacatecano” and the musical accompaniment of the acclaimed regional Mexican band Banda Sinaloense, fans each night will witness Pepe perform alongside his brother Antonio Aguilar, Hijo; his talented daughter, Grammy and Latin Grammy nominee Ángela; and his son Leonardo, two-time Latin Grammy nominee. A massive production involving more than 150 people, including 40 stage musicians alone, the tour offers a spectacular, once-in-a-lifetime experience for those in attendance, combining sensational music sets with bull fighting and rodeo events, such as horse riding and equestrian acrobatic performances.

Catch @PepeAguilar here Sept 17 as he returns with the family for his 2021 Jaripeo Sin Fronteras USA Tour! Tickets on sale this Friday, May 7th at 12PM
#OnlyLive can you get this feeling with @theweeknd 🖤 Catch his #SBLV performance tmrw and see him live at Oakland Arena on the #AFTERHOURS World Tour. Head to theweeknd.com/tour for tix + info.
@theweeknd has announced new dates on his upcoming #AFTERHOURS tour ahead of his historic #SBLV performance this Sunday. The previously scheduled August 3 date at #Oakland Arena has been rescheduled to March 8, 2022 🖤
See you all in #2021 ✨
Can’t stop listening to @ShawnMendes’ new album #WONDER. Here’s one of our fav moments from the last time Shawn took the stage in Oakland. Drop a 🖤 below if you were here!
Reminiscing 😌
1 in 4 people are not registered to #vote. Check your status in less time than it takes to microwave popcorn here👇 nationalvoterregistrationday.org
Tonight we are going RED in solidarity with the live entertainment industry as part of the #RedAlertRESTART initiative. Join our team in posting your favorite live event memory using #WeMakeEvents #RedAlertRESTART
Who remembers plaza parties? #DubNation Arena Archives - June 2019
Tonight we #LightItBlue to thank all the medical professionals around the world. We thank you greatly for your service during this time. Today on World Health Day, and everyday, we honor you with an #ASMGlobalStandingOvation
Where my Icy Girls at? 💎 Arena Archives - #RollingLoud 2019
Reminiscing about opening up the pit 💭 Arena Archives - #RollingLoud 2019
👅
Happy V-Day from us & Ginuwine 🌹
What’s your favorite @celinedion song? Come sing along with us on 4/9 🎤 #CourageWorldTour