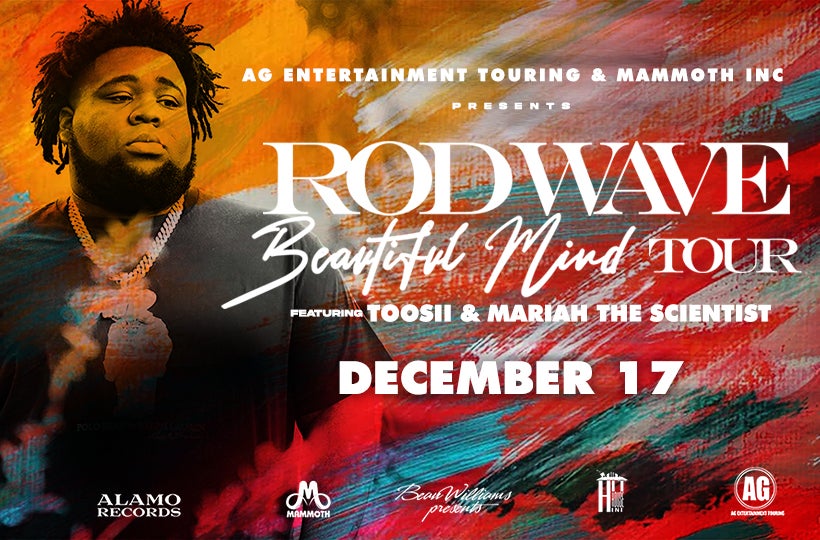 Blessed with a special singing voice, and an uncanny gift for songwriting, Florida's Rod Wave is taking his own path to the top of the game. Coming through with a soulful set of Southern sing-raps, the St. Petersburg native has built a groundswell of regional support and blossomed into a national streaming phenomenon. After releasing 3 projects in a 12 month span – Hunger Games 3, PTSD, and the platinum-certified Ghetto Gospel – Rod first erupted onto the scene with the viral 3x-platinum “Heart On Ice." His debut album, Pray 4 Love, was certified platinum within a year of release, propelled by the TikTok crossover moment "Rags2Riches." He surpassed Pray 4 Love one year later with SoulFly, which became Rod’s first-ever #1 album on the Billboard charts. After embarking on his 35-date nationwide SoulFly tour in the fall, Rod released two massive singles, the platinum-certified "By Your Side" and the Hank Williams-sampling "Cold December." The two singles set the stage for his third studio album, Beautiful Mind, which likewise debuted #1 on the Billboard charts.

The Arena Box Office will not be selling tickets until the day of the show.

Upgrade your experience now and enjoy the convenience of spending less time waiting in line.The Fast Pass ticket will allow you entry at the E Lot Premium Entrance. Present your Fast Pass ticket along with your ticket to the event for entry and skip the public entry lines.

@yg // The Red Cup Tour 📸: @priscillapple
JUST ANNOUNCED! @future and Friends- One Big Party Tour are coming to Oakland Arena on April 1st! Tickets on sale Feb. 1st at 10:00am
Tomorrow is the last day to register for a chance to purchase tickets to see @zachlanebryan here on August 21st! Click the 🔗 in our bio to register via Fair AXS.
@zachlanebryan is coming to Oakland on August 21! Register now through January 29 for the chance to purchase Zach Bryan tickets via Fair AXS. Click the 🔗 in our bio to register via Fair AXS.
JUST ANNOUNCED! Straight Jokes! No Chaser Comedy Tour hosted by Mike Epps with Cedric the Entertainer, D.L. Hughley, Earthquake & D.C. Young Fly are coming to Oakland Arena on May 6th. General on sale begins this Friday at 10AM.
JUST ANNOUNCED! GLORIA the tour is coming to Oakland Aren on Aug. 27!! @SamSmith will be joined by the incredible @jessiereyez. American Express® Card Members have first access to purchase tickets before the general public beginning this Monday at 9:00 AM. Excited to see you all there! ❤️‍🔥
@rodwave
🆘 PRESALE HAPPENING NOW 🆘 @sza with special guest @omar.apollo on March 14th! Code: GARDEN 🔗 in bio!
JUST ANNOUNCED 🌊 @sza is bringing her S.O.S North American Tour with special guest @omar.apollo to Oakland on March 14th! Get tickets this Friday at 12:00pm
Dragons are coming to Las Vegas. Check out a first glimpse into a new Game of Thrones attraction https://bit.ly/GotDragonsLV . #gotvegas #gotdragons #asmglobal
🤠 📸: @priscillapple
The queen returned to Oakland last night 👑 📸: @matts2kool
👑
JUST ANNOUNCED! @rodwave on Dec.17th! Tickets on sale Friday 10/7 at 10:00am.
Don’t miss @wutangclan, @nas and special guests @bustarhymes this Saturday 10/1! Hit the 🔗 in our bio for tickets!
@therealmaryjblige kicks off her Good Morning Gorgeous Tour this Saturday! ✨ Don't miss her with special guest @queennaija here on October 6th! For more information visit http://BPCTickets.com
@kendricklamar x @keem
IF I DIDN’T LEARN TO LOVE MYSELF, FORGIVE MYSELF A HUNDRED TIMES 🌫
KING KUNTA 🔥
We’re just a week away from stepping’ into two nights of @kendricklamar at Oakland Arena! Get your tickets now at Ticketmaster.com before they’re gone. Ticket 🔗 in bio!