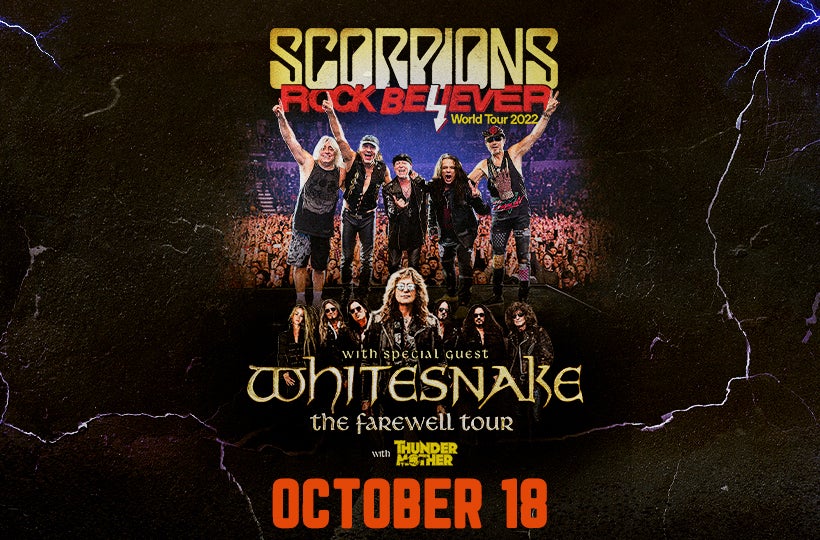 Scorpions, one of the most iconic and influential hard rock bands of all time will return to North America on the Rock Believer World Tour with special guests Whitesnake on their Farewell tour.

Fresh off of their sold-out Sin City Nights Las Vegas residency, Scorpions will kick off a two month-long Live Nation produced run of dates on August 14th in Toronto with additional concerts in Los Angeles, Detroit, Chicago, Dallas, and Denver, amongst others. In addition to Whitesnake, Swedish band Thundermother will be joining the tour.

Tickets go on sale to the public on Friday, May 13 at 10am local time on Ticketmaster.com. Scorpions Rock Zone fan club members will have exclusive, first access to tickets starting Tuesday, May 10 at 10a local time. For more information and to join the fan community visit The-Scorpions.com/RockZone

JUST ANNOUNCED @kendricklamar’s #TheBigSteppersTour with @keem & @tanna.duh on August 31 and September 1 at Oakland Arena. Tickets on sale next Friday 12pm. #kendricklamar
Who’s ridin’? @kendricklamar returns to Oakland on #thebigstepperstour with @keem & @tanna.duh August 31 and September 1st.💥 Tickets on sale next Friday 12:00pm. 🎥: @tonyrain415 #kendricklamar
JUST ANNOUNCED 🤘 @scorpions on Oct. 18th. Tickets on sale 5/13 at 10:00am!
JUST ANNOUNCED @secondskyfest is returning to the Oakland Arena Grounds on Oct. 29th & 30th. Tickets will be available Friday May 13th- signup for early access at secondskyfest.com
Hip-Hop Icons @wutangclan & @nas are bringing their #newyorkstateofmindtour here on Oct. 1st!
SHOW POSTPONED: The J Balvin show scheduled for May 1st has been postponed and a new date will be announced soon. Please visit our website for more details.
JUST ANNOUNCED 💥 @daddyyankee on Aug 2nd! Tickets on sale 4/15 at 10:00am
JUST ANNOUNCED 🚨 @anuel on Sept. 10th On sale April 8th at 10:00am
Your summer bop is HERE!! ☀️☀️ We can't wait to sing along with @ShawnMendes when he brings Wonder: The World Tour to us on Sept. 17th. Limited tickets available, starting at $39.50. Get them now at: bit.ly/WonderOakland
We got lost…we called… @feliciathegoat answered our call 📞🐐🍩 #callmeifyougetlost #liveinoakland
@marcanthony brought the moves to Oakland last night 😎 #liveinoakland
We've teamed up with @oaklandcoffee to bring you the “From Oakland With Love” giveaway! Enter through 3/28 for a chance to win FOUR VIP TICKETS & a specially curated bundle of Oakland Coffee’s shockingly smooth organic coffee and awesome merch. 🔗 in bio to enter!
Last night was magical ✨ Until next time @twicetagram
JUST ANNOUNCED 🔥 @mount_westmore featuring @snoopdogg @icecube @e40 @tooshort + special guest @warreng on May 27th! Tickets on sale 2/11 at 10:00am
“El Stomper” getting hyped for @badbunnypr #WORLDSHOTTESTTOUR on Sept. 14th #AtTheColiseum 🔥🌴 Tickets on sale at noon