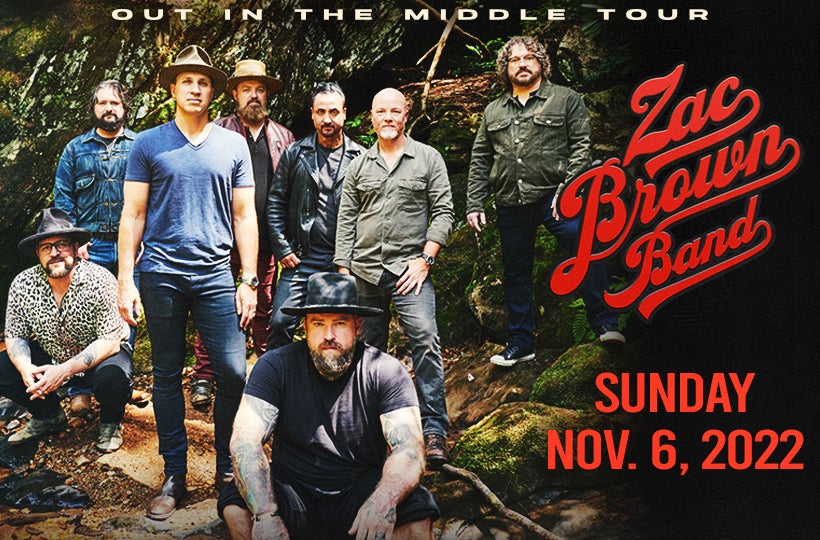 The multi-platinum, GRAMMY Award-winning Zac Brown Band will be embarking on their 2022 international tour, “Out in the Middle Tour.”

The new set of dates, produced by Live Nation, follows 2021’s incredibly successful “The Comeback Tour”. The “Out in the Middle Tour” will see the band return to some of the nation’s most iconic venues including Oakland Arena.

The “Out in the Middle Tour” will showcase the band’s old-school country roots and southern-rock style, serving as an ode to their country pride and life’s simple pleasures. Joining the band once again will be Caroline Jones, who performed as a special guest during "The Comeback Tour." Zac Brown Band also welcomes Robert Randolph Band as the opening act on select dates throughout the tour.

Upgrade your experience now and enjoy the convenience of spending less time waiting in line.The Fast Pass ticket will allow you entry at the E Lot Premium Entrance. Present your Fast Pass ticket along with your ticket to the event for entry and skip the public entry lines.

CONTEST ALERT 🚨 In honor of #CleanAirDayCA, we are giving away a pair of concert tickets for guests traveling via #BART or an electric vehicle! Contest Rules: Guests traveling to #OaklandArena via BART or an Electric Vehicle must post a photo: •At the Coliseum BART station with the Coliseum behind you. •Or at the Coliseum pedestrian BART bridge with Coliseum behind you. •Or in front your electric vehicle with the Coliseum or Arena behind you. Use hashtag #OaklandArenaCleansAir to enter to win tickets to an upcoming show. The winner will be chosen on CA Clean Air Day, October 5th at 11:59pm *Exclusions apply.”
It’s been almost three months since Chicago and I still look down at my leg in disbelief. Two years of waiting through the pandemic, hoping we would have an opening to be a band again and continue the work we started 30 some odd years ago. Rehearsing, training, reconciling, working our way back to form. Then one and a half shows into it and my tendon tears. Felt like a sick joke the universe played on me. As I write this I remind myself it’s just bad circumstance. Just a fucked up moment. Unfortunately it is a moment that requires a lot of work and healing. I have a severe tear in my left Achilles tendon and only 8% of my tendon was left intact. And even that portion was severely compromised. It’s not simply a question of being able to perform again, but extends to basic functionality going forward. That’s why I’ve made the painful and difficult decision to cancel the remaining shows on our 2023 North American leg. I hate cancelling shows. I hate disappointing our fans. You have all waited so patiently to see us and that is never lost on me. I never take that for granted. For you I have the ultimate gratitude and respect. To my brothers Tim, Brad, and Tom; to El P, Killer Mike, Trackstar and the whole RTJ crew; to everyone on our production team: techs, cooks, drivers, assistants, security squad, to anyone and everyone who made the shows thus far possible, all my love and respect. I hope to see you very soon. Zack de la Rocha Tickets bought online through Ticketmaster or AXS will be automatically refunded to the original method of payment used at the time of purchase once funds are received from the venue (which is usually completed within 30 day). Anyone who paid cash should contact the box office directly.
👑
JUST ANNOUNCED! @rodwave on Dec.17th! Tickets on sale Friday 10/7 at 10:00am.
Don’t miss @wutangclan, @nas and special guests @bustarhymes this Saturday 10/1! Hit the 🔗 in our bio for tickets!
Hallelujah 🙏, @ptxofficial just announced their holiday tour! Pentatonix: A Christmas Spectacular is coming to Oakland on November 17th at Oakland Arena, with special guest @girlnamedtom . 🌲 Tickets on sale this Friday at 10:00am.
@therealmaryjblige kicks off her Good Morning Gorgeous Tour this Saturday! ✨ Don't miss her with special guest @queennaija here on October 6th! For more information visit http://BPCTickets.com
@ateez_official_ coming to Oakland! Registration for ATINY presale begins Friday, Sept 16 at 10 am PT. ATINE Presale starts Wed, Sept 21. Public Onsale starts Friday Sept 23. ATEEZLIVE.COM
@kendricklamar x @keem
IF I DIDN’T LEARN TO LOVE MYSELF, FORGIVE MYSELF A HUNDRED TIMES 🌫
KING KUNTA 🔥
We’re just a week away from stepping’ into two nights of @kendricklamar at Oakland Arena! Get your tickets now at Ticketmaster.com before they’re gone. Ticket 🔗 in bio!
FLASH MOB VIBES 💎💎💎
JUST ANNOUNCED 🚨 The Millennium Tour: Turned Up ⬆️ featuring Bow Wow and Mario on Nov. 27! Lineup includes Keri Hilson, Lloyd, Pleasure P, Bobby V, Day26, Ying Yang Twins, Dem Franchize Boyz, Crime Mob, Sammie, Chingy, Travis Porter, Lil Scrappy, and Trillville! Presale starts August 18 at 10am - use code BPC. General onsale is August 19 at 10am. For more information visit GSquaredEvents.com
LEGENDADDY 🐐 #daddyyankee #laultimavueltaworldtour #liveinoakland
The #bigstepperstour hits #oakland 8.31 & 9.1 Who’s coming? 📸: Greg Noire